Michael Brady is a member of the

Allied Artists of America and the

and he has won numerous awards in their national exhibitions.

In addition, his work has been exhibited in the Walter Vincent Smith Museum of fine arts (Springfield , Massachusetts ), and numerous galleries in Greece, Israel, Germany, Austria , Holland and the United States.

His paintings also hang in public collections in Greece, Israel, Germany, Austria, and the United States.


@ Presentation-interview of Michael Brady about his life's work @

The city has worked on the imagination of artists and writers for centuries.

Powerful, yet often contradictory images, either celebrating our common humanity, or mediating our disenfranchisement and loss of hope.

The city, in all it's complexity serves as a metaphor illustrating the state of modern life.

Michael Brady grew up in Brooklyn, amidst the tenements, Chinese restaurants, local Italian and Jewish shops, streets crowded with pushcart vendors and the sounds of an inexhaustible humanity.

Time and time again this urbanized world re-appears in his paintings; the chaotic traffic, the tightly packed crowds, the elevated railways running between the buildings and the fire escapes in front of the houses.

His work is a teeming frieze of the streets, and the emphasis is on the mysterious value of ordinary life, not its futility.

Irreverent and ironic, it's both a self portrait, and an angry and compassionate attack on respectable, conventional America.

His strongest works, such as `Street Corner' and `The Love Song' are white hot and inspired, both funny and terrible; a mans attempt to tell the truth about the life he has known.

His is a prophetic warning of what deadens life, and an affirmation that it can be lived in an age whose sterile non-cultures seek to divert and destroy all mainsprings of fertility and joy 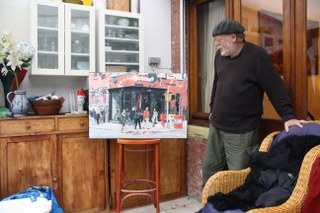 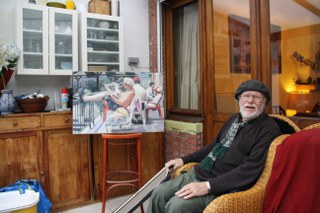 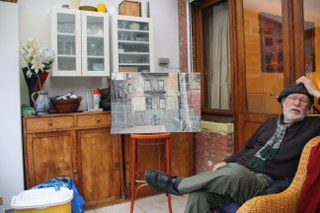 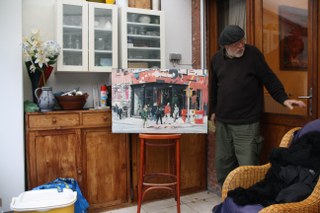